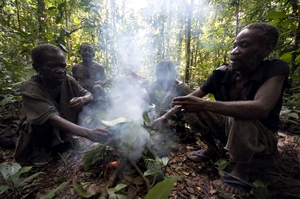 В 1961 году антрополог Colin Turnbull изучал племя пигмеев, живших в густых джунглях. Проведя всю жизнь в сплошном лесу, где условия видимости не позволяют наблюдать удалённые предметы, аборигены совершенно не обладали чувством расстояния, не знали, что чем дальше объект, тем меньше его кажущийся размер. Когда одного из пигмеев вывезли на открытую равнину и показали ему стадо буйволов, пасущихся вдали, он спросил «Что это за насекомые?».
An effect of the rainforest environment on perception is the curtailment of perspective. Anything that is seen is seen at close range. In hunting the game makes its presence known largely by the sound it makes until it appears suddenly within a few yards of the hunter. Outside the rainforest the Pygmy is bewildered by distance, the lack of trees and the sharpness of relief. He seems incapable of reading the cues for perspective. Colin Turnbull describes the bewilderment of the Pygmy, Kenge, when he was taken to the open grasslands near Lake Edward. A flock of buffaloes grazed several miles away, far below where they were standing. Kenge asked Turnbull, "What insects are these?"

When I told Kenge that the insects were buffalo, he roared with laughter and told me not to tell such stupid lies. When Henri, who was thoroughly puzzled, told him the same thing, and explained that visitors to the park had to have a guide with them at all times because there were so many dan-gerous animals, Kenge still didn't believe but strained his eyes to see more clearly and asked what kind of buffalo they were that they were so small. I told him they were sometimes nearly twice the size of a forest buffalo, and he shrugged his shoulders and said he would not be standing out there in the open if they were. I tried telling him they were possibly as far away as from Epulu to the village of Kopu, beyond Eboyo. He began scraping the mud off his arms and legs, no longer interested in such fantasies.[8]

On another occasion Turnbull pointed to a boat in the middle of the lake. It was a large fishing boat with several people in it. Kenge thought it was a floating piece of wood.

The BaMbuti Pygmies lack the stars, the seasons, the sky, and the earth that figure prominently in the cosmic views of most other peoples.